How to Downgrade to Unsigned iOS Without iTunes 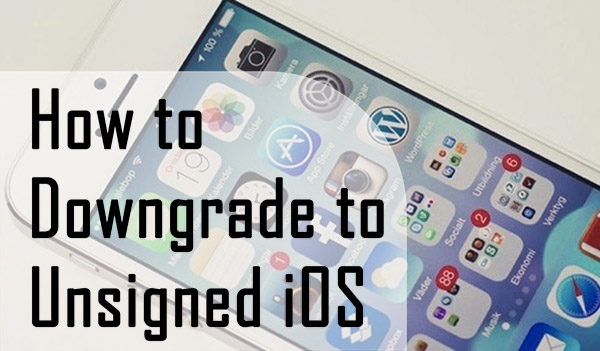 If you don't want your iOS device to update automatically, you'll need to downgrade to an unsigned iOS System. This thing prevents your system from installing new iOS updates as new iOS versions can contain bugs that can be harmful to your device. Unfortunately, you won't find any official method to get your job done. However, you can read this guide to find out how to downgrade to unsigned iOS

Since you may find installing unsigned iOS difficult via iTunes, we'll show you the unique way to get your job done. Apart from this, we'll also you about the software that can fix your iOS device issues.

Part 1. Why do people want to downgrade to an unsigned iOS version?

In this way, Apple makes jailbreaking software and iOS device fairly difficult. However, you can still downgrade to unsigned iOS using a few methods. However, you can't get it done officially. People want to downgrade to unsigned IPSW for allowing them to move to a stable iOS system, so they don't have to install a new iOS update whenever it comes.

Part 2: How to downgrade to unsigned iOS without iTunes?

If you want to downgrade iOS to unsigned version without iTunes, you'll need to follow the steps below. However, you need to meet certain requirements before installing an unsigned iOS.

First of all, you'll need to install NonceSet 1112 on your PC. Now, you can install the futurerestore after downloading the iPhone iOS firmware.

Note: You'll need to ensure your device has at least 9 to 10GB of free space.

1) In this phase, you'll need to create a folder and name it futurerestore on your computer. Later, all you need to do is unzip your futurerestore file there. Your folder should look like c:/futurerestore. Now, you'll only need to copy the SHSH2 and IPSW into this folder. Moreover, if you want to write your command line pretty easily, you can try changing the names of your files.

3) After launching the app again, you'll need to ensure the key string you've found is correct. You should make sure you haven't launched iTunes, or else you won't be able to download to unsigned iOS without iTunes. Next, you'll need to connect your iPhone to a PC and ensure both devices use the same Wi-Fi network.

4) In this phase, you'll only need to access the computer's operating system as an administrator. Later, you'll need to enter the command line futurerestore -t my.hsh2 -i signed.ipsw restoreto.ipsw after launching the Command Prompt.

5) After entering the command line, you'll need to hit the Enter icon, and after this, the process of downgrading to unsigned iOS will start occurring. You need to wait for a few minutes before it gets completed.

If you're facing an iOS issue, you don't need to worry. Instead, you need to take the services of TunesKit iOS System Recovery. Surprisingly, this tool can help get rid of 150+ software issues. It is a pretty incredible third party that has set high standards.

Moreover, solving your iPhone issues is pretty straightforward as you'll only need to follow a few guidelines to get your job done. Luckily, using TunesKit iOS System Recovery, you've also got the luxury to repair your device with no data loss. However, for this, you'll need to select the Standard Mode to put the things in order.

Here's the guide to repairing your device.

Step 1: In the first phase, you'll only need to visit the official TunesKit iOS System Recovery website and download the latest version of this application. After installing it on your Windows or Desktop computer, you'll need to launch the software. Moreover, you'll also need to connect iPhone to your PC.

Step 2: Now, if you don't want to lose any important information on your iPhone, select the Standard Mode option from the TunesKit iOS System Recovery tool's interface.

Step 3: After hitting the Standard Mode icon, you'll need to get the latest version of the Firmware Package downloaded.

Now, all you need to do is press the Repair button and allow the software to restore your device. After having your job done, you need to see how this method goes for you.

If you face an iOS device issue during the downgrading to unsigned iOS process, you can take the services of TunesKit iOS System Recovery. It is a prestigious third-party tool that allows you to get rid of many iOS device issues.