How to Remove Flashlight from Lock Screen? 2022 Best Guide

Apple is forever in the quest to provide unique experiences to its customers. So, you would have noticed how the company has changed iPhone's hardware and software design over the years. A recent update allows users to add shortcuts to the lock screen for flashlight, camera, and other necessities. So, is it a helpful feature, or will users be fine without the update? Importantly, how to remove flashlight from iPhone lock screen?

Part 1. Turn Off Raise/Tap to Wake Up to Prevent Turning on the Flashlight
Part 2. Tips to Turn Off Flashlight on iPhone
Part 3. How to Unlock iPhone when the Passcode is Forgotten
Part 4. Closing Words

Part 1. Turn Off Raise/Tap to Wake Up to Prevent Turning on the Flashlight

The "Raise to Wake" feature is available by Apple on all iPhones. It allows your iPhone to come alive when you lift it without the need to tap the screen. In addition, it helps one check notifications and has access to the control center. However, disabling the feature is quite accommodating in terms of battery life and prevents accidental activation of the flashlight. The following are the steps that help you how to remove flashlight from lock screen on iPhone 13:

Step 1. Open the "Display & Brightness" by opening the "Settings" app.
Step 2. Scroll down, find the "Raise to Wake" feature, and toggle it to the "Off" position. 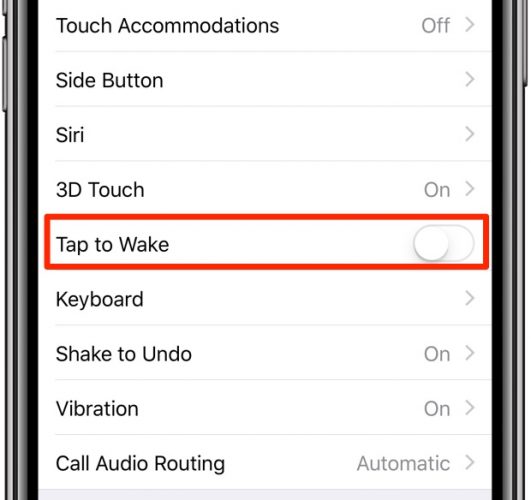 Part 2. Tips to Turn Off Flashlight on iPhone

Step 1. Access the "Control Center" after opening the "Settings" app.
Step 2. Identify the Shortcut option and check for the "Customize Control" feature. Now, beside "Flashlight", click the "-"sign.
Step 3. Click the "Remove" feature from the options and save the settings.
Step 4. Go back to the home screen.

You will now notice that the flashlight is no longer available in the Control Panel. 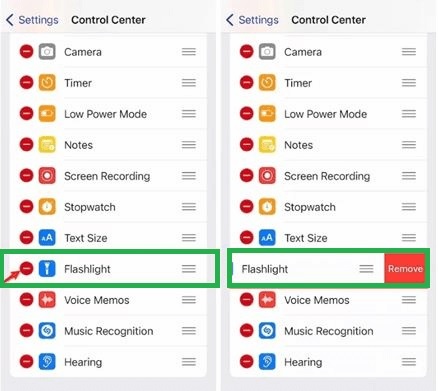 You can disable the entire Control Center on the lock screen if you find it difficult or face trouble with the flashlight. The steps are as follows:

Step 1. Open the "Settings" app.
Step 2. In the menu, choose "Touch ID & Passcode".
Step 3. Click the "Remove" feature from the options and save the settings.
Step 4. Scroll until you find the "Allow Access When Locked" feature. Then, turn off or disable the Control Center feature by toggling the switch.
Step 5. Tap back to exit the settings.

The next time you lock the iPhone, you will not see the Control Center. 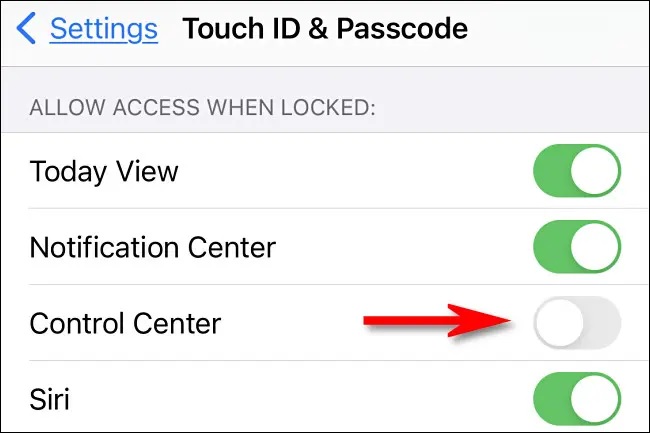 Tip 3. Turn Off Flashlight Via Siri

If you are wondering how to remove flashlight from lock screen using Siri, then you have the apt answer. As you have disabled the Control Center, you can ask Siri to turn the flashlight off. The following steps will you turn off the flashlight using Siri:

If "Hey Siri" is not active on your phone, you can proceed with the following steps:

Hold the Home button on your iPhone and then ask Siri to turn off the flashlight.

Part 3. How to Unlock iPhone when the Passcode is Forgotten

Suppose you have bought a second-hand iPhone or forgotten the lock screen password. In that case, you could be asking how to remove flashlight from lock screen under such circumstances. The only thing that can come to your rescue in these situations is TunesKit iPhone Unlocker. It is an exceptional tool that helps you unlock the phone and remove the lock screen passcode.

Guide to Use TunesKit iPhone Unlocker

Before proceeding with the steps discussed below, ensure that you have installed the software on your computer.

Launch the TunesKit iPhone Unlocker software and connect the iPhone to the computer. After connecting the device, click the "Unlock iOS Screen" option from the software. When you press the "Start" button, you will see a new window open, and TunesKit detects the iPhone. 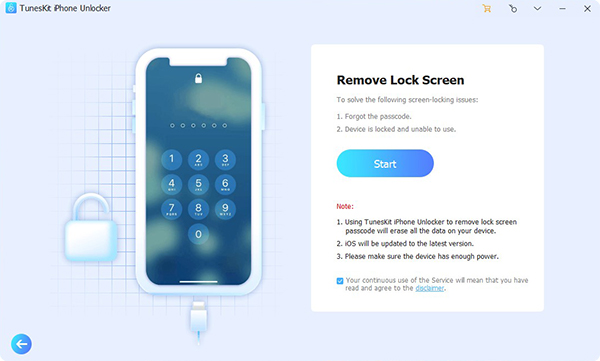 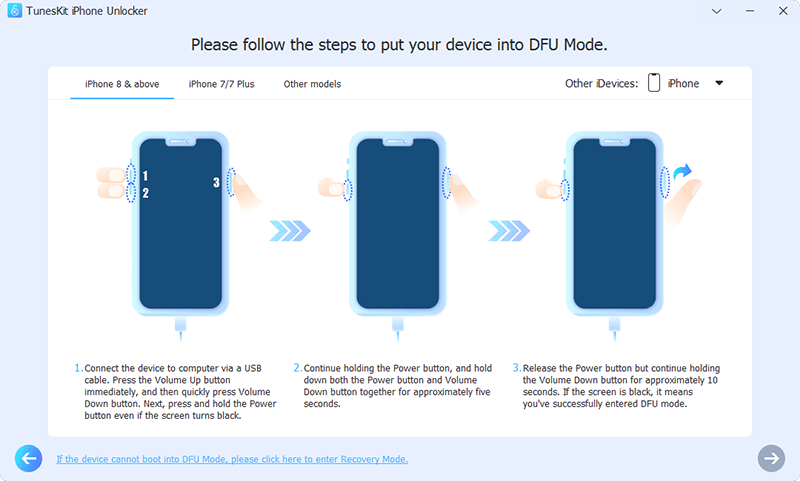 Once TunesKit identifies the iPhone, it will display the information on the interface. If there are any mistakes, you can select the model and iOS versions. Then, select the firmware version and press the "Download" button. If the download fails, copy the link, and download it using a web browser. 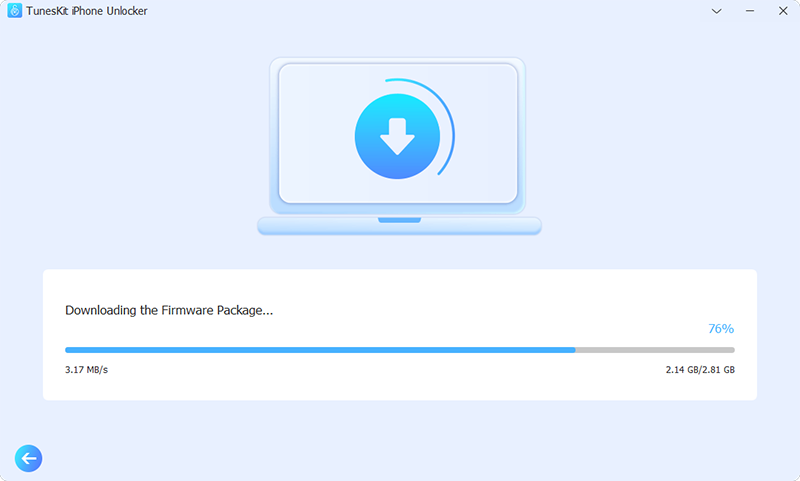 Wait until TunesKit completes downloading the firmware package. You can remove the device's passcode by clicking the "Unlock" button. A few minutes later, you will see that the device's display lights up, and you can access it without needing the passcode. 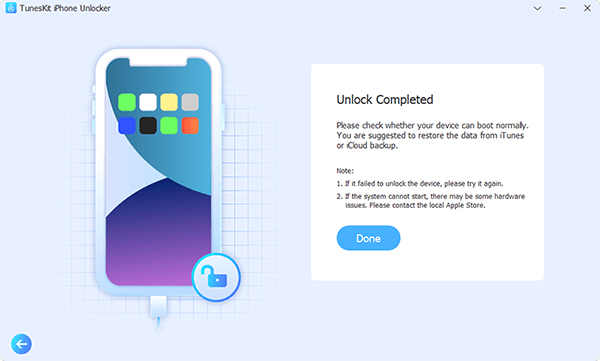 Now that you learned how to remove flashlight from lock screen, choose the appropriate answer that fits your requirement. The guide provides solutions about removing the flashlight from the lock screen on iPhone 13 and more. You can toggle off the raise to wake or use Siri to turn off the flashlight. But, if you forgot your passcode or have a second-hand iPhone, we advise you to use TunesKit iPhone Unlocker to unlock the device.