One day, after I used my iPad for learning, I pressed the Home button to let it get back to the home screen, but it was unresponsive. I was confused and don't know what to do. Later I sought help on the internet and found some good solutions to this problem and finally got out of the trouble. So in order to help those whose iPad Home button is broken without any signs and look for "do it yourself" ways before sending it to the Apple store, I listed the following 6 fixes to iPad Home button not working issue.

Restarting the iOS devices is probably the easiest way to solve related problems like iPad's unresponsive Home button, and it does work under many circumstances. Here are the steps.

Step 1: Hold the Power button until the slide to power off is shown on the screen.

Step 2: Let go of the Power button and press down the Home button.

Among all comments I viewed, it turns out that some people hold the point that the broken Home button on iPad may result from some dust and debris accumulated in it. Thus to make it work, you should simply clean up the button. To try this method, you have to prepare the alcohol and cottons. Then pour a drop of alcohol on the cotton and clean the button especially around the corners.

There are also other workable ways you could give it a try such as the portrait view. Follow the below procedures to fix iPad Home button stuck error.

Step 1: Press the Home button when the iPad is in portrait view.

Step 2: Stay pressing the Home button and switch the iPad to the landscape mode.

Step 3: Convert the device back to the portrait view.

Step 4: When iPad’s screen is rotating, release the button. 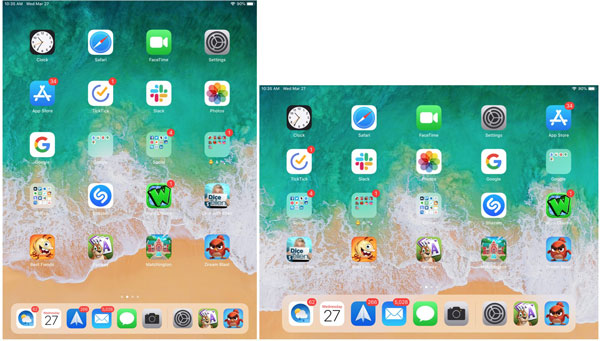 Another worth-trying way is the 5-finger gesture. To settle the iPad Home button won't work matter, just try this.

Step 1: Head to settings on the iPad and turn on the Multitasking Gestures switch.

Step 3: Pinch the fingers and grab them. 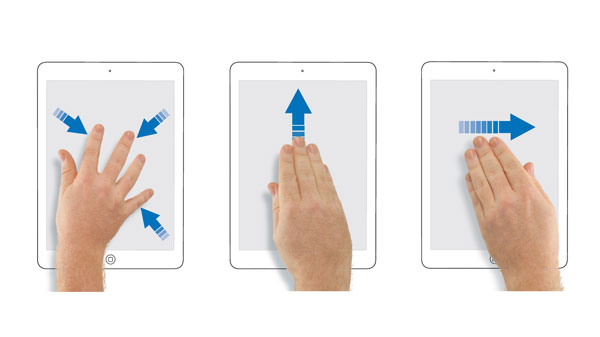 If you think the 5-finger gesture is a little confusing, then you could create a virtual button named Assistive touch. It is a temporary fix to your iPad Home button won't work. To turn on the Assistive touch, open the Settings on iPad and click Accessibility and Assistive Touch, finally switch it on and at this time you will see a small button on the screen. But this button just makes your iPad locked and turn it off. To work out this problem completely, you need to continue to try other alternatives, for instance, the one I'll introduce to you in the last part. 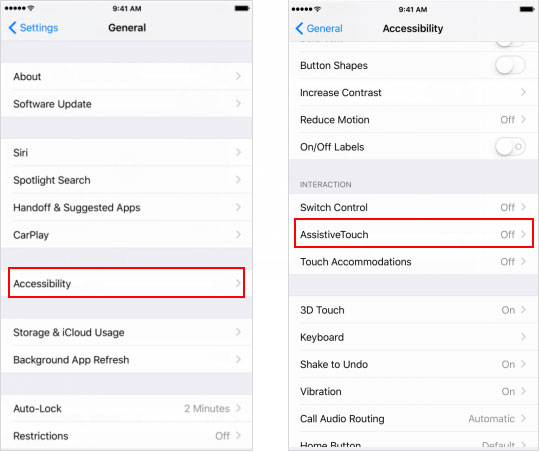 If you reached here, then it's most likely the iPad Home screen problem is attributed to the software errors. In this case, you can send it to the Apple store for help or just first use related iOS system repair tools, take TunesKit iOS System Recovery as an example, what makes this software stands out is that it can resolve more than 50 issues related to iOS and tvOS system without removing any data. With TunesKit iOS System Repair in hand, you are able to clear out other potential problems that lead to the iPad’s Home button becoming unresponsive and completely manage the iOS system. The rest of the main features of it are as presented below.

Step 1:Connect iPad to the computer.

Open the program and hook up your iPad with the computer through a USB cable. After the device is detected, tap the Start button. Select the Standard Mode and tap on the Next button. Next, simply click the "Enter Recovery Mode" button in the main interface to put your device into the recovery mode, which is necessary for the following steps.

It is suggested to confirm the device info and correct anything wrong before taking the following step. After that, you can press the Download button and the application will begin downloading the firmware package matched with the device.

When you meet with this issue of Home button stuck on iPad, try out the above methods one by one until the problem is solved. Or you can skip the former 5 uncertain fixes and directly use the iOS system recovery tools to settle the iPad Home button not working problem.